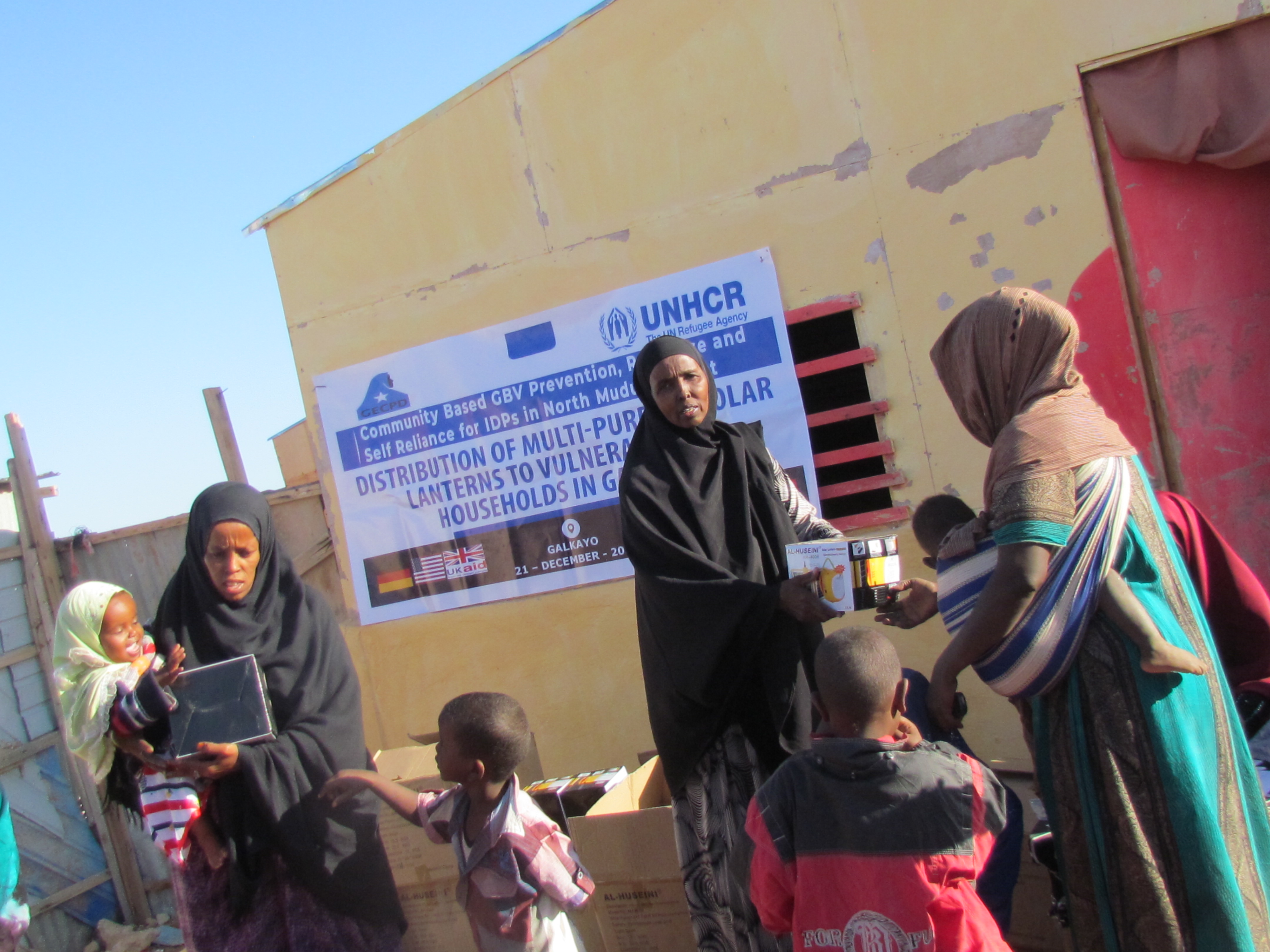 A mothers’ from Ala-Amin1A IDPs camp receiving their pairs of solar lantern.

In an effort to secure the IDPs Settlements and specifically Girls and Women from GBV and other related cases, GECPD has taken the initiative to light up the IDPs Settlements. This is an activity under Community Based GBV Prevention, Response, and Self-Reliance for IDPs in North Mudug, a project Funded by UNHCR. Under this project, 1000 Multi-purpose Solar Lanterns Have been distributed to 1000 identified IDPs Households in Galkayo.

The project targets mainly IDP female-headed households in an effort to reduce their risk and vulnerability to GBV. Every household is given one multi-purpose Solar Lantern Light for Mobile phone charging and lighting. The Solar Light is portable and can be fixed at any place the user may feel convenient.  Due to the Light’s portability and brightness, it can be used by school going children for their studies at night.

Located North of Galkayo, Ala-Amin1A is one of the IDPs Settlement that has so far benefited from the distribution of the Solar Lanterns. The Settlement hosts 220 families mostly displaced and dispersed by drought.

“These Solar Lanterns will greatly help us to secure our Girls and Women especially from night-time Rapists. The houses will be safer more than before.” Said Omar Ali, a resident of Ala-Amin1A IDP camp while thanking UNHCR and GECPD for their continuous efforts in securing the IDPs and the IDPs’ Settlements.

Apart from provision of Light, the Solar Lanterns will generally secure the Beneficiaries especially healthwise. The Lights will reduce the health risk women and girls are exposed to while using charcoal, fire wood and candles and the smoke that they produce forthwith as a source of lighting. The Solar Lanterns will also reduce the incidences of fire outbreaks that cause destruction in the IDPs Settlements.

For the sustainability of the Project, GECPD with the funding of UNHCR, has trained 20 IDP Boys in Maintenance and Repair of Solar Power Systems. The trainees will be in charge of repairing of the Solar Lanterns in case they become faulty or if they develop complexities.

Moreover, GECPD together with UNHCR has gone a notch higher to light up IDPs settlements in totality. This involves repairing and maintaining of Solar Powered Security Lights In the all the IDPs Settlements in Galkayo using the services of the 20 Trained IDPs Boys. This year, 40 Solar Powered Security Lights will be Repaired and Maintained in Halabookhad (20 Lights), Madina Mnawara (10 Lights) and Salaama (10 Lights).