STRENGTH OF A WOMAN; CHALLENGING SOCIO-CULTURAL STEREOTYPES THROUGH PRACTICAL ENGAGEMENT 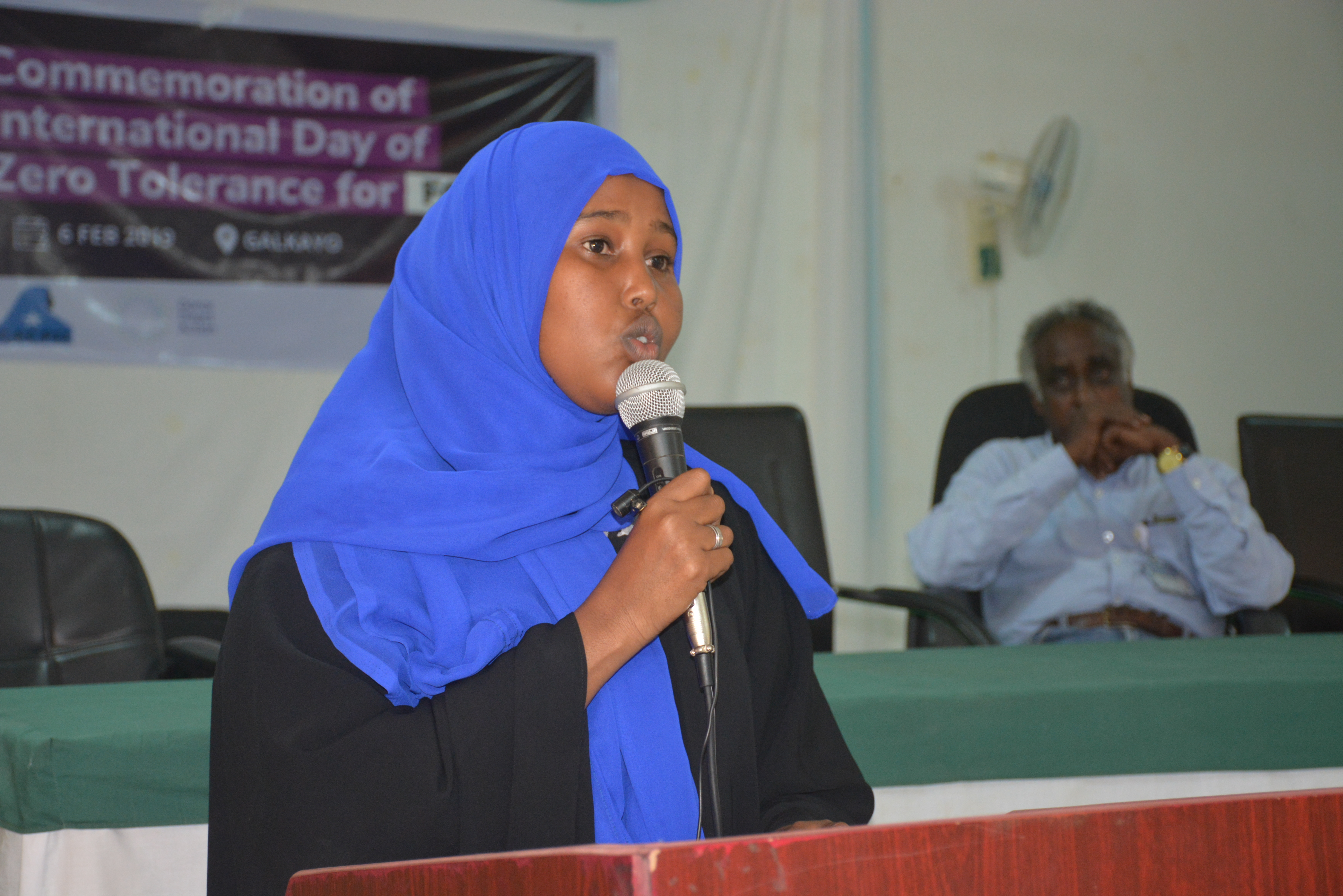 Zamzam Abshir, Speaking at Commemoration of the International Day of Zero Tolerance for FGM, held in Galkayo.

SHE always has one of the busiest days. If she is not providing counselling, support and advocacy for survivors of GBV and other human rights abuses, she will be busy interacting with and giving encouragement to fellow young women, engaging with elders or community members to understand what their needs are and what they think should be done. Her motto is “Naag Iskadhig” (Be a Woman). In this she seeks to encourage women and girls not to always be cry babies but rather rise up and fight for their space and prove their ability to perform. To her womanhood is not a sign of vulnerability or the weak gender but a demonstration of unlimited capabilities.

27-year-old Zamzam Abshir Samriye is one of the 6 women elected in March 2019 to serve on the 31-member Galkayo Municipal Council. She is among the pioneer girls who enrolled when GECPD started in 2000. She heard that the school was for girls, was free and she came on her own to enroll. In the evening she told her mother she had enrolled in the school and her mother made her promise that she would still attend to her household chores and when Zamzam agreed her mother allowed her to attend. “My mother was skeptical at first because she wondered why the school would be free and also people were saying that the founders wanted to impose ‘Western culture’ on the girls. I enrolled in 2002 and remember going to and from school with people insulting us for attending the ‘foreign school’ that would ‘spoil us’, but I kept going,” she says. Her focus was on her dream to become that powerful woman who would fight for and advocate for the rights of fellow women and girls. 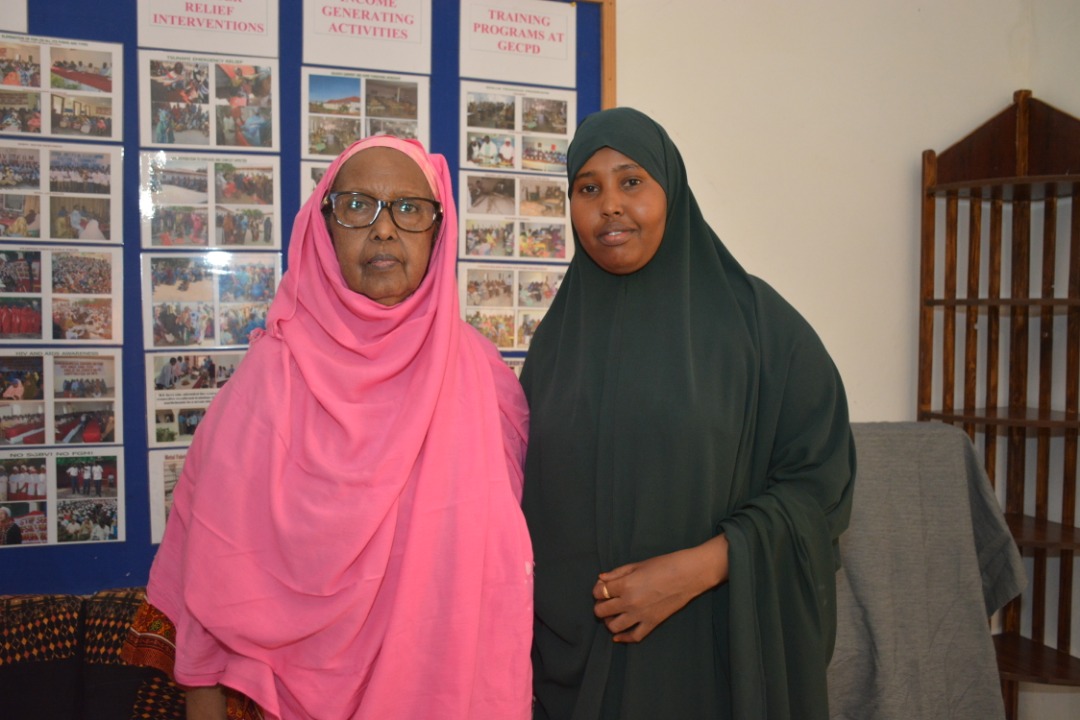 Zamzam completed her primary education alongside 46 other girls at GECPD in 2007 and proceeded to a mixed secondary school. “When I went to secondary school, the boys in our class would tell us to shut up because we were confident and eager to answer questions in class. Most of the girls who were bold were from GECPD centre,” she remembers with a chuckle. Having earned two Diplomas in Education and Community Development, today Zamzam is not only the first girl in her extended family to acquire such an academic attainment but also to attend school.

But her life and academic success has not come on a silver platter. She has had to endure turbulent times from insults from groups of mischievous boys while on her way to school to the heavy social responsibility of caring for the family which she had to help her mother. “Sometimes they could hail stones and filth at us while in class,” she recalls. Besides she had to contend with a daily routine of household chores including waking up early to prepare breakfast before coming to school and rushing home after school to prepare lunch for the male members of the family. “That is the only way I could reassure them that my going to school will not negatively affect the operations of the family”, she says with a sigh of relief on her face.

The fruits of Zamzam’s hard work started paying off to the family when she started working part-time as an office assistant thanks to the Office Management and Computer Skills course she underwent in her final year at GECPD. The course, coupled with her past experience working as a volunteer Child Protection Monitor at GECPD, secured her the job. “It came in handy especially when my mother was bedridden after being involved in an accident and could no longer fend for the family,” she explains. 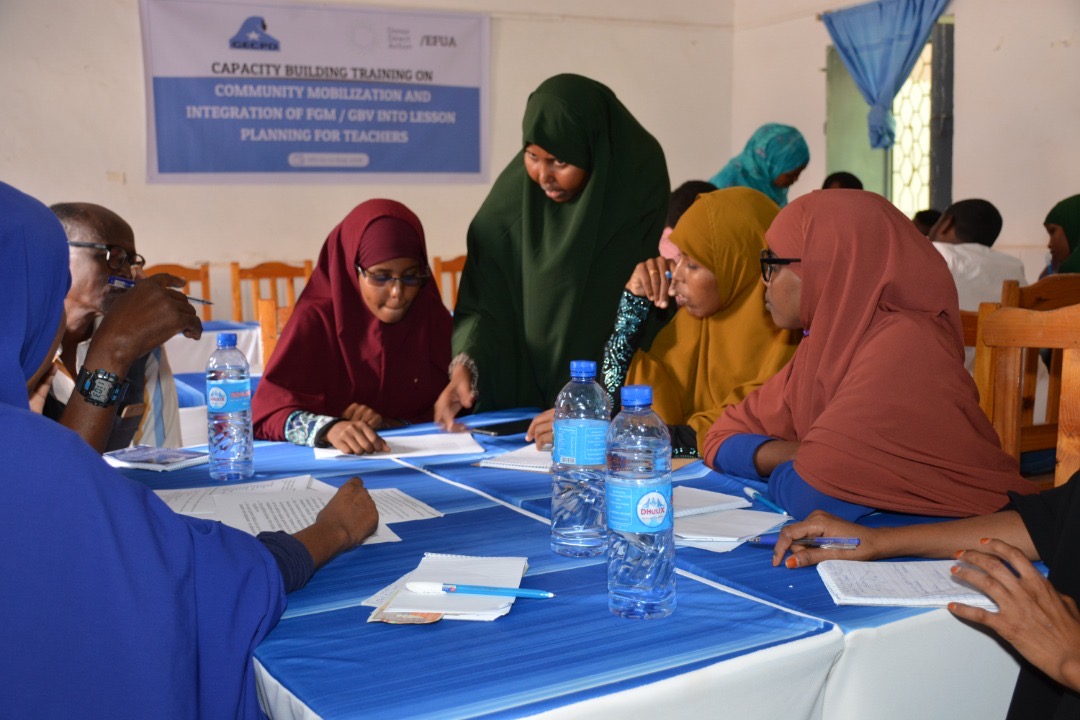 While at GECPD, Zamzam benefited from the integrated curriculum which empowered her with the knowledge on issues pertinent to women rights including FGM, SGBV, gender equality, civic and political participation, girl child education, child marriage among others. This inspired and encouraged her to pursue her dream of becoming a woman of influence and plunging into the male dominated area in the patriarchal Somali society. Politics. “I realized it is only through this route that I can effectively participate in formulating policies that will ensure greater freedom and respect for women and girls”, she says with a resolute face. At the Galkayo Municipal Council, her duties are wide ranging as a member of the Municipal Business Committee and Social Affairs Committee. Through this, she has been able to successfully advocate for inclusion of women on estate management committees for the first time. Besides, she is a motivational speaker to young girls and conducts lecturers on Fridays on range of topics including leadership, public speaking, girls’ education and creativity. Moreover, she has participated in sports and encouraged fellow girls and women to do so to challenge stereotypes that it is a preserve of boys and men.

Many as they may seem -for a lady of her age in Somalia-, Zamzam does not consider her achievements an end in itself, but a means to even greater achievements. She looks forward to becoming the first female mayor of Galkayo and later on a cabinet minister. But then she has a problem with what women are offered in such appointments. “When you say a minister as a woman mostly you are assigned the ministry of women and gender affairs. That is not what am looking forward to. I want a substantive ministry like education or finance where I can prove myself and my capability”, she explains.

Zamzam is grateful that GECPD through the support of Oxfam Novib, Diakonia and other donors has changed her life and put her closer to realizing her dreams. “It is fascinating to see some of my relatives who were against my going to school, bragging of my achievement and respecting my ideas. I thank GECPD and all its back donors for helping me realize this dignified status. Surely the real power is in the pen,” she concludes.