The tenth Parliament of Somalia was inaugurated in a ceremony on 27th December 2016 that saw 283 members of parliament (MPs) take their oaths of office ahead of presidential elections scheduled for later January.

Forty-one of the MPs became senators in the Upper House while 242 are members of the House of the People. The MPs were sworn in at the General Kahiye Police Academy during a function officiated by the outgoing Speaker of the Federal Parliament of Somalia, Mohamed Sheikh Osman Jawari.

The swearing in ceremony came after months of intense lobbying and campaigns as the 6 Federal States (Somaliland, Puntland, Galmudug, Jubbaland, South West and Hir-Shabbelle) and Banadir region elected their representatives to the two chambers of parliament. The hallmark of the new parliament is the increase in the number of women who will sit in the tenth parliament. Out of those who took their oaths were 73 women and 210 men. 10 of the female representatives will seat in the upper house while 63 will seat in the lower house. A total of 30 seats including 19 in the lower house and 11 in the upper house are yet to be filled following disputes over elections results.

Hawa Yusuf, Our former Gender and VAW officer and current MP at Somali lower house. Speaking at event against GBV in Galkayo

Analysts and women rights activists have celebrated this new development as a major step towards realizing of the 30% representation for women as enshrined in the Somali constitution of 2012. “It is a positive step. And even though we are yet to attain our 30% right this is a great achievement. It is a demonstration that with political will it can be done,” said Hawa Aden Mohamed- a woman rights activist and founder of the Galkayo Education Center for Peace and Development GECPD. There is hope that once the vacant seats are filled the number of female representatives could increase in both houses. He highlighted the increase in the number of women who will sit in the tenth parliament and credited in part the efforts of the Federal Indirect Electoral Implementation Team (FIEIT) and the rules established by the National Leadership Forum for this achievement.

It has been a good year for GECPD- an organization committed to women and girls political social and economic empowerment as some of its staff and volunteers clinched seats in the elections. Among the women elected was a Shukri Adan Mohamed and Hawa Yussuf Ahmed who were elected to the upper house and lower house respectively. The two have – until their election- been working as Volunteer and Board Member and Programs Officer at GECPD respectively. This was in addition to two other staff –Deeqo Mohamed Ali and Sulekho Abdirizak who had earlier in 2016 been elected as councilors to the Galkayo Municipal council. Deeqo was until her election a Cashier while Sulekho has been a teacher at GECPD.

And even though the elections were not conducted by universal suffrage on the basis of one man one vote, observers have lauded them as a development from the last elections. Unlike in the 2012 elections where representatives were elected purely on clan basis, representatives were elected within the regional states which observers say gives them genuine constituents. The electoral process incorporated the clan system and an electoral college of 14,025 delegates selected by their clan chiefs that elected the representatives from nominees submitted by the clans. 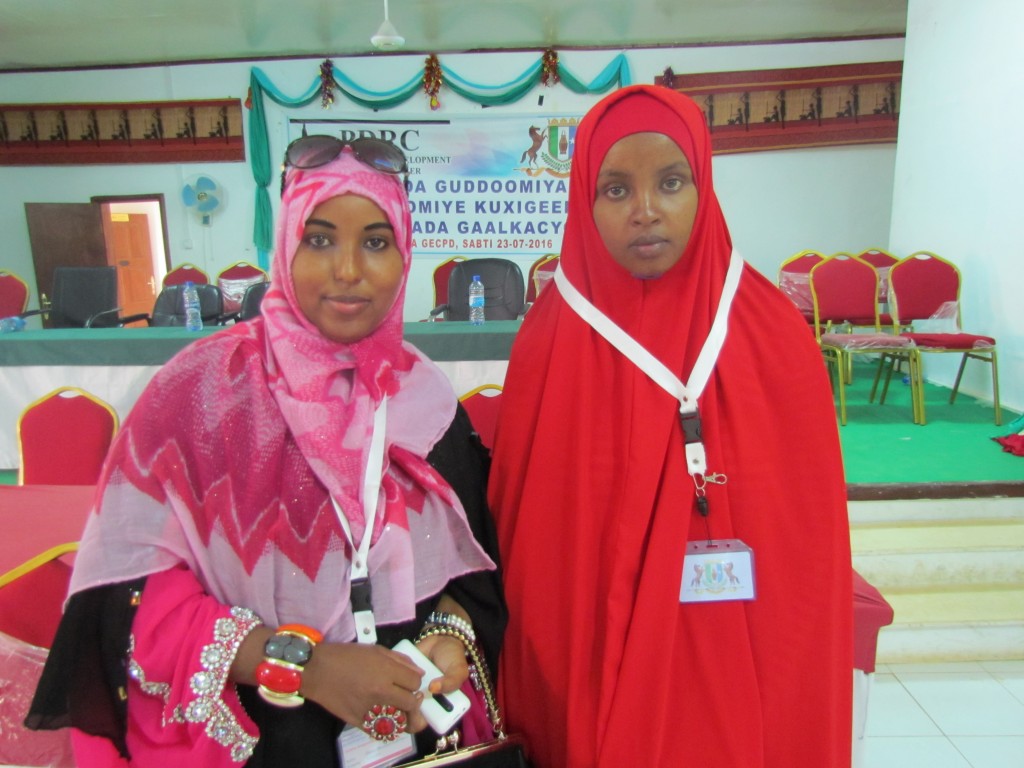 The swearing in ceremony was attended by senior government officials such as the outgoing Prime Minister Omar Abdirashid Ali Sharmarke, who was elected to the Upper House as a senator, and the outgoing Deputy Prime Minister Mohamed Omar Arte, who won a seat in the House of the People.

Invited guests included members of the diplomatic corps, senior officials of the African Union Mission in Somalia (AMISOM) led by the Deputy Special Representative of the Chairperson of the African Union Commission (DSRCC) for Somalia, Lydia Wanyoto, and the Chairman of the FIEIT, Omar Mohamed Abdulle.

Presidential elections which have previously been postponed four times are now scheduled for 24th January 2017. The 329 representatives of the two houses of parliament will be choosing from a long list of some 20 candidates. Among the candidates is the only woman Fadumo Dayib. Although indications are that she may withdraw from the race. Fadumo has lamented malpractices including “corruption and voter fraud” in the electoral process.